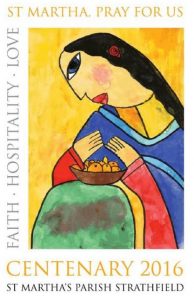 Faith, Hospitality and Service, which details the families, religious and clergy of one of the most significant parishes in the Archdiocese of Sydney, from the 1880s up until today, draws heavily on research undertaken in archives in Ireland and across Australia.

A small Catholic community began at Redmyre (now Strathfield) in the 1880s under the unofficial leader, John Toohey, the brewery baron, whose business activities did not impress the wowser dissenting element that (then) dominated the locality. Toohey’s wife and other women played a significant role in fundraising for numerous Catholic endeavours such as the Dominican Sisters’ establishment of Santa Sabina College (1890s) and the first St Martha’s Church (1905). The Strathfield Catholic community was a strong part of the parish of St Mary’s Burwood (now Concord) until 1916, when it rightly gained its independence.

Faith, Hospitality and Service has more than 20 chapters and includes 700 clergy, religious, and lay people. The book includes a focus of each of the seven Parish Priests, and also chapters on the kind-hearted Administrator, Fr Brian Titmuss, and the dynamic Fr Geoffrey Davey.

Many of the 80 photos are rare and published for the first time. Also included is a summary of Strathfield Catholics’ contributions to the broader community. The book is comprehensively referenced and indexed to assist readers and future researchers.

The book will appeal to readers, young and old, to current and former parishioners, to anyone interested in the social fabric of Strathfield, as well as the contributions made by numerous Irish clergy to the Australian ‘Mission’.

Faith, Hospitality and Service is available for sale, for just $20 (plus handling and postage if applicable) from St Martha’s Catholic Church, Strathfield, NSW, Australia, 2135.

The author, DJ Gleeson holds a Master of Commerce in Economic History (Honours), and a PhD in Australian History. The author is a past president of the Australian Catholic Historical Society and has published in scholarly journals across Australia, Ireland, and the UK.